Gordon Duncan’s Tunes is the first book published by the Gordon Duncan Memorial Trust of Gordon’s excellent compositions. There has always been tremendous interest in the original music of Gordon Duncan. His stunning compositions have featured in his own ground-breaking recordings and studio sessions, in his work with top Scottish traditional music bands and in the medleys of many top-grade pipe bands, especially those of which he was a member. Gordon’s tunes have crossed-over into many other traditional instruments, such as the fiddle and accordion. Compiled and produced by his brother, Ian Duncan, the book includes many photos of Gordon and around 50 of his original compositions, some of them well known but many more of which had yet to see the light of day. This collection is a must have for pipers and other traditional musicians. The music is in piping notation, but the tunes can be played by folk bands, dance bands and others.

There are no reviews yet.

Only logged in customers who have purchased this product may leave a review. 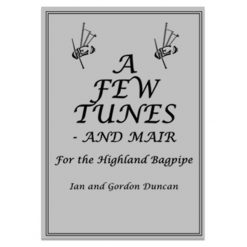 A Few Tunes – and Mair by Ian & Gordon Duncan